CASTLE NOT FOR SALE, BUT QUIRKY AND GOTHIC:

The castle was up for sale during 2011, as I had planned to move to Sussex for the children to live near their grandmother. However it was withdrawn from sale when we realised it was not very 'saleable'.

We found no one really wants to take it on – not in the current economic climate. We had a few dreamers - all of whom were naive and failed to appreciate the responsibility they'd be taking on, but found they would not get a bank to offer them a mortgage. I met a few very intelligent business-minded people who wisely worried about the continuing capital expenditure required. I know it probably needs another £2-3m to finish the restoration, just to bring all the derelict rooms into service.

We budget £200k a year for 'capital works', much of which is essential roof repairs and maintenance, so creating new en-suites out of the remaining derelict rooms progresses very slowly. Anyone with the ability to take on such a project, soon realises it is not something they would get a return on. Commercially they would be better off spending their money on a completed building closer to decent population centres, not somewhere remote and rural with lots that needs doing. Wiser heads steer clear; there are better things they can do with their money. Fools would rush in, but can't raise the cash. 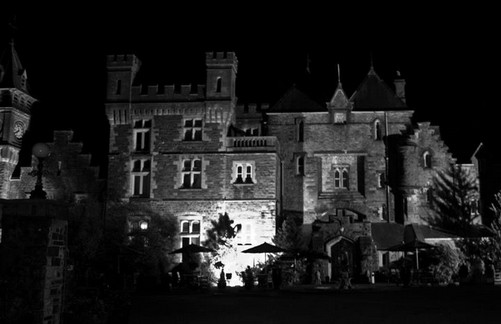 So what happened to my move?

In 2011/2012 I had planned to relocate to West Sussex so my oldest (then only) son could attend school near his grandmother. The oldest was then four, and he'd been put down for a school there. We felt it would be good for him to grow up knowing his grandmother, who is also a good disciplinarian. Also the climate in Sussex is better!

However our plans changed and we registered him and his younger brother at a school in Dorset, from September 2017. It's 2 hours from his Grandmother, so a bit closer compared to the 4 hours from Wales, plus I like the rural nature of the county, and it is sunnier.

By this time I no longer wanted to sell the castle anyway. It continues to be an interesting restoration project, is a large self-sustaining business in its own right, and I might as well see it through to completion (another 20 years probably).

I did consider renting in Dorset (buying not being an option), but felt renting was wasting money. So I have our small self catering farmhouse up for sale instead. It would make sense to 'swap' the farmhouse for a holiday letting cottage in Dorset so we'd use the cottage in school term times, and let it out during the school holidays / summer season. However this is not an essential sale, as on 30/06/2014 I bought a second hand 6 berth Bailey Caravan on E-Bay.

I quickly fell in love with caravanning and average 110 nights a year (all the school holidays and half terms) in it. We go touring around Britain, France and Switzerland with the children while the castle is run by a good management team who have the benefit of lots of email 'directing' from me. I continue to design a lot of the websites and oversee the marketing side 'remotely' thanks to WIFI and the internet.

Becoming a 'full timer' (someone who lives permanently in a caravan) able to tour around and constantly visit new places, became something to aspire to. I loved the sense of freedom and escaping to the countryside. Much the same motivation as I had when buying the castle - this was my own 'Escape to the Country' in 2000. It is good to be on the move and the family is used to it. And so the transition from Castle to Caravan has become a pleasurable diversion.

We base our large touring caravan on a site near the school for the term times. Conveniently there is a small Caravan Club CL site (CL sites have a 5 caravan limit but often there's no one there at all) two miles from the school. For the winters if we tire of the caravan, I found some Dorset holiday cottages take a 3 month off-season 'winter let' at a fraction of their normal rates. We can return to the Castle in the holidays, whenever we're not off touring in the caravan. I decided against renting a house in Dorset as paying rent is throwing money down the drain. As I prefer touring, plus have my real home in the Castle, a rented house would not be fully used anyway.

Craig y Nos does not lend itself to being a private house. It is really a large entertainment venue and hotel. We've gradually expanded into some derelict rooms so we have our own 'apartment.' There are also flats for staff. But for a wealthy person wanting a mansion, there are plenty of lovely country homes designed for private living. The Castle is not so designed and it would take a lot to change it from a hotel and wedding business. The ground floor rooms are really too large, though Adelina Patti would also have used them for entertainment and functions, as she was always entertaining her many society guests.

Also now, for the private buyer, the castle is too near the road. This is good for a commercial building of course, but not for someone with £1.5 to £2m to spend on a private house - they'd prefer some country pile up a long private drive.

Few private buyers would choose to live in a huge and expensive-to-run castle (even a mock gothic one), with over 100 rooms - many still derelict, a Grade One listed historically important opera house, and about £3m of liabilities in future spending to finish it to a high standard.

Someone looking for a commercial proposition would also find more favourable opportunities. There are many struggling hotels ripe for take-over, or hotels that come up for sale because the owner wants to retire, whom someone looking for an opportunity, who knows they could do better, would snap up. I know of a few that have changed hands since I have been here.

Ideally the castle needs someone with deep pockets and a personal interest in giving it a go. There are not many that fit this profile. What I did find was a lot of people expressing an interest in buying it who were incredibly naive about what they might be taking on. I pointed out they would be best advised to take on some of the staff who 'know the building' and to continue running it as a going concern. Most new owners though want to walk in and start afresh, and wouldn't have a clue.

I was equally naive when I bought the Castle in 2000. The difference was I at least had the good fortune to have another income stream. At the time I could afford to take it on. Indeed my other small business was being taxed heavily and I objected to paying so much out in tax and seeing nothing for it. I thought the only way to avoid tax is to not have too high a profit. In 2000 I was open to taking on an interesting project, on which I could off-set the expenses of developing, against the profits of the other business.

I had a vague idea of eventually having the two businesses up and running profitably, before repeating the formula with another project. Sadly the other business 'died' around 2007-10, though is still run as a much smaller operation. And the castle proved to be a much bigger project than I'd envisaged. 2011 was a bad trading year too, so at the time, selling it seemed attractive. Then I met the potential buyers...

Few of the potential buyers I met would have been prepared to accept no return for several years. The only intelligent chap I met who had half a brain and who could have afforded it, worked out it needed £3m further capital expenditure, and declined. He was the only one with the means to do it. He also had the intelligence not to.

Craig y Nos has been pulled up from a derelict leaking shell into an almost viable business. I say 'almost' for it is always a challenge generating enough income. Weddings are a godsend, and the near 100 weddings we host a year are crucially important in funding the continued restoration and maintenance.

Craig y Nos was a major employer in Patti's day. It is now, once more, a substantial employer in this part of the world. I reckon it will always be a commercial building rather than a private house and like the neighbouring show caves, it will remain a draw for tourism and events. My emphasis is on keeping it on as a going concern. The priority right now is to make the most of the investment we have already put in, by trading at break-even or a small surplus.

If Craig y Nos is to receive further substantial renovation investment, it needs to continue to generate a viable level of income, to fund its ongoing costs and to become self-sustainable.

There are not very many people around who are prepared to take the castle on, as it is a daunting prospect. Even though we have done a substantial amount of work to it, we are only about half way to getting it into the condition we would like it to be in. It is a shame there are no Government grants available as if the building was in the state sector, substantial funds would no doubt be made available.

As things stand, the castle may remain in its half-restored state for many years, a bit tatty around the edges, yet impressive in large parts. It is half grand, half derelict, a curious mix of smart wedding venue with all the finery topped by derelict rooms suitable only for ghost hunts and our history tours.

Craig y Nos is informal, friendly and more of a family place, rather than posh and smart and formal. Inside it is an unpretentious 3 star guest house but with great presence and some grand rooms. Outside it looks imposing and 'wow' - when it's not pouring with rain. It looks as if it perhaps should be a five star hotel, but it is not, at least not yet.

It may one day become what perhaps it ought to be, in which case it would be unaffordable for most, or it may 'choose' to stay as it is for a few decades yet, accessible to all. Quirky and gothic, and individual, stubbornly so, in an era where modernisation standardises everywhere into square boxy rooms in modern buildings.

The Castle also has a strong and loyal, enthusiastic team who are succeeding in gaining good feedback from customers, which all helps to increase our trade and safeguard the building's long term future. Staff always come and go, but there are many now who have been here over 10 years, some as far back as 2000, and everyone who works here is enthusiastic about the project.