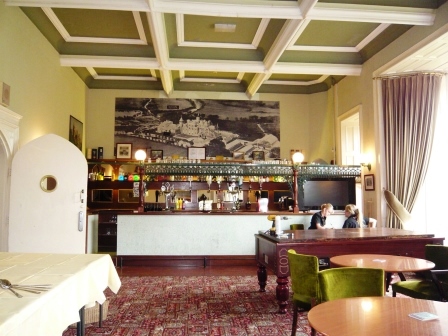 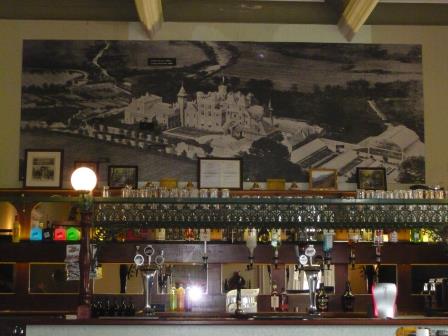 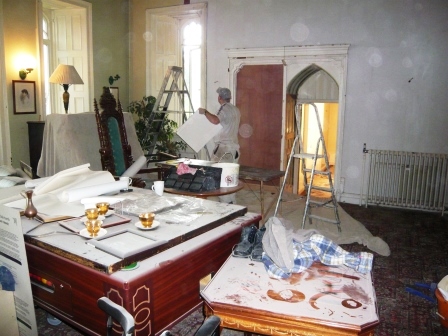 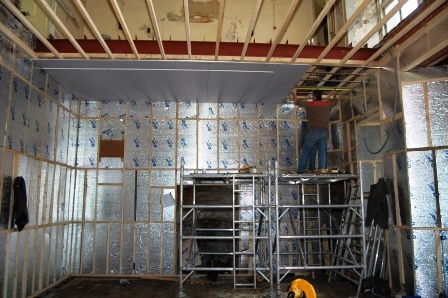 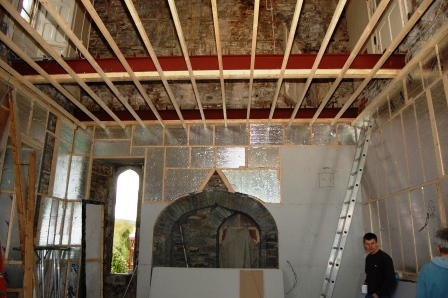 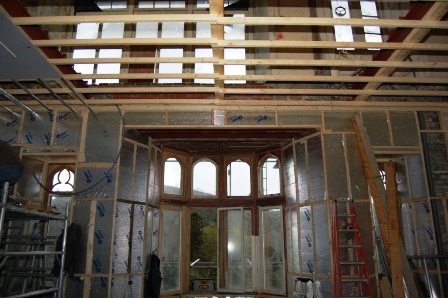 We planned a similar make-over for what used to be the Nicolini Bar only to uncover serious structural problems. Water leaks from the top floor had saturated the internal stone walls, causing beams and joists to rot where they were fitted into the stone walls. This meant the ceiling, which we had started to repaint, was not stable and had to come down.

See original historical picture of the Nicolini Lounge as a study for Nicolini here. See the room as it is today here.

The ceiling was found to be resting on just two beams, being about 10% of the original support network of beams and joists. The rest was just hanging in the air. So the original ceiling had to be dismantled and re-built from scratch with massive new steel support joists. You can see some of this work on this page.

This used to be a very cold room because there was nothing between the stone walls and the wall panels. So we put in loads of insulation as you can see from the pictures. Now, once the fires are lit, this becomes quite a wam and cosy room in winter, where once it was one of the coldest rooms in the castle. Amazing what proper insulation can achieve!

Most hotels have a waiting area or reception room for guests to sit down and relax in, upon arrival. The original Nicolini Bar, being next to the reception desk, was never used as a bar as people preferred the cosier Patti Bar. Clearly though, previous owners had thought to have one function room with a bar serving one end of the building and another function room and bar at the other end, hence the two bars (yet the conservatory was still derelict so they never needed the Nicolini Bar either).

The Nicolini bar was never used, and also it was impossible to leave it stocked and keep an eye on the wine and spirits all the time as the room and bar was part of the 'public access' areas. Some people were caught nipping behind the bar and helping themselves at functions! I first thought to halve its size and make the bar area lockable, with the rest of the room predominantly as a lounge. As soon as we started taking things out and uncovering what was hidden, we discovered the amount of work that needed doing. We realised we had to take the room back to bare stone and give it a complete make-over.

An old stone arch was concealed by double doors and wooden shelves.  We tried repainting the wood panelling and considered replacing the shelves, but as the wood was powdery with dry rot, we had to strip it all out, revealing the interesting 'arch within an arch' feature hidden behind shelving and panelling. This has now been left exposed. It is an interesting curiosity and we cannot work out which came first - the larger or the smaller arch, and why build a smaller arch within a larger arch anyway?

We know there had been a set of grand double doors between the breakfast room and the Nicolini lounge, covering these double stone arches. The stonework had been hacked away to make space for the double wooden doors' frames. Quite why such excellent stonework was put in place only to be panelled over is a mystery. The stonemasons of the day went to great trouble to design an interesting arch, only for the Victorians to cover it with wood panelling.

We think it may have to do with creating grand double doors to perpetuate the illusion that they led into another grand room, where in reality the double doors concealed a much less impressive, narrow single door entrance into the small Breakfast Room.

In place of the old bar, we have now reinstated the fireplace, having located the chimney. A new wood burning stove made by Clearview - the ONLY wood burning stove able to generate the high temperatures the Castle needs and to survive the high temperature without falling apart - has been installed in the Nicolini room. Earlier stoves by Stovex have not stood the test of time, their internal concrete fire bricks cracking due to excess heat. If you have a big room, buy Clearview - twice the price but at least five times the life and double or triple the heat output.

We spent some weeks buying up loads of chesterfield sofas, Queen Anne high-backed chesterfield chairs and low club chairs, one set a time. The typical householder has one of each and as we have some 26 Chesterfields, this meant driving all over the country over several weeks collecting three pieces at a time. We bought them all on E-Bay at an average spend of £350 a set, a considerable saving over the £2,000 or so decent sets of three (a Queen Anne, a Sofa and a Club Chair) cost new. Probably the most economical part of the Nicolini room refurbishment.

We have converted this room into a nice new reception lounge that guests can relax in upon arrival. We had only
planned to give it a lick of paint and take out the old bar. We took a couple of ceiling panels down to inspect it... 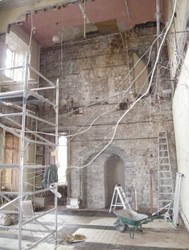 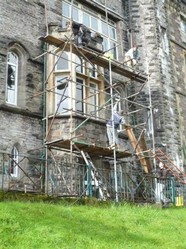 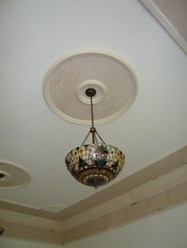 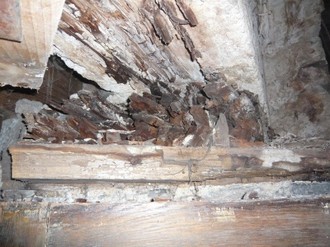 ...and we saw extensive dry rot in the original ceiling, so we had to take the old ceiling down and build a new one. 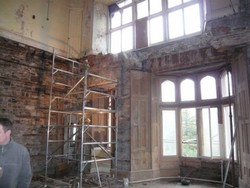 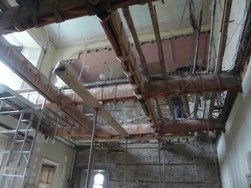 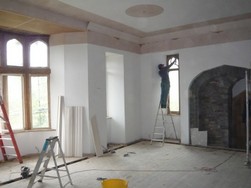 The finished result is very comfortable but few guests will ever realise both the floor and the ceiling had to be totally rebuilt! 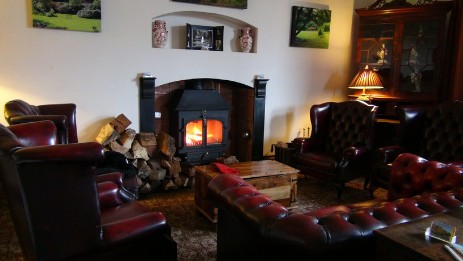 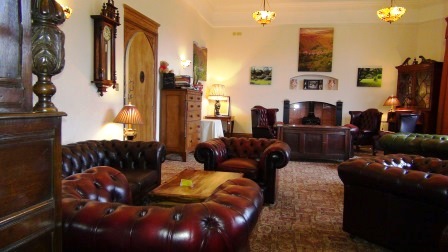